Truckers Should Not Fear Autonomous Trucking

Any truck driver that enjoyed the recent super-hero mutant film Logan probably recalls one very standout scene in the middle of the film that focused on autonomous trucking. The characters find themselves on the run and struggling to deal with escape on a highway that is filled with hordes of driverless trucks barrelling down the road with the expected, machine-like efficiency.

It was a short, but a very telling scene in which the implication was that freight transportation in America had now become completely automated, and that driverless trucks were now the primary method of logistics management in the USA. But was this scene true? Are truck drivers really going to be phased out? 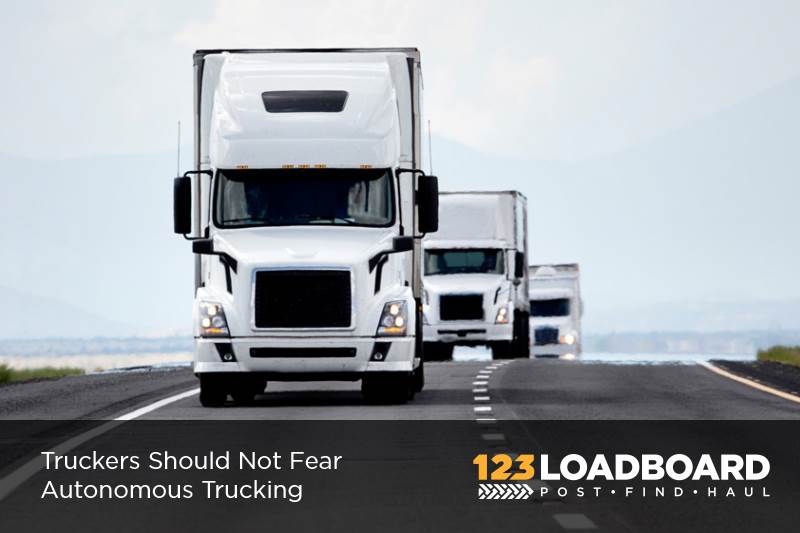 On the surface, it looks like autonomous, self-driving vehicles are about to put a lot of people out of jobs. The marketing around this concept is, of course, very impressive to watch. Vehicles that require no driver, don’t get tired, don’t need to stop for sleep, meals or toilet breaks, that automatically follow all the traffic laws to the point where traffic police become redundant? Superficially, it sounds great.

The reality is, we’re still a long way from that with trucks, even if that becomes a reality in cities. Driverless trucks and other types of autonomous vehicles are in the testing stages; there’s no denying that. In Florida, for example, there are even tests being conducted right now with autonomous truck convoys trying to take advantage of “slipstreaming” by closely following behind a lead truck to benefit from reduced drag and greater fuel efficiency. But there are still quite a few hurdles that have to be overcome on many levels before any of this becomes practical.

Self-driving cars are making a lot of headway in cities because the logistics of city driving are very, very different from interstate, or cross-country driving. Cities are smaller areas, with more controlled conditions, and, more importantly, easy access to the infrastructure required for repair and maintenance of just about anything.

Driverless trucks, however, would face very different challenges, especially driving from one state to another, or across several states. Whereas a self-driving car in the city wouldn’t have to worry too much if it were run into a problem in winter ice road trucking, such as running afoul of bad weather that blocks roads, a driverless truck, in the middle of an interstate highway, wouldn’t have the luxury of an immediate urban response.

Right now, there is a job shortage of truckers. Some people think that driverless trucks will help alleviate that, and maybe, to some degree, it can. But driverless trucks can only do one thing, and that is drive from one destination to the next. They cannot anticipate unexpected actions, they are helpless to deal with any mechanical problems that come up, and in the uncontrolled conditions of the road between towns and cities, there are many more variables to deal with that no one has anticipated.

There still needs to be human accountability in trucking. It’s going to be a very long time before driverless trucks require no human attendance. For the foreseeable future, humans will still play an important role in making sure driverless trucks “stick to the program” instead of becoming lost and helpless when something unexpected happens.

The Future Is Coming

Autonomous vehicles are going to become a part of our future. But the actual displacement of jobs, especially in the area of logistics transportation, is severely overestimated. Machines won’t be able to do this job by themselves for quite some time.

FIND LOADS FOR YOUR TRUCK

How To Protect Yourself From Double Brokering

In a perfect world, transportation logistics would be a fairly simple transaction. As a Trucker, you get the goods, you bring it to the appointed destination, the job is done, and everyone either gets paid or gets their goods. Fortunately, this scenario plays out most of the time in the world of American Logistics. However, there are times when things become a lot of more complicated for various reasons tied to greed. One of those times is when double brokering occurs.