Is Truck Driving One Of America’s Deadliest Occupations?

Traveling and seeing the country may be an added benefit for truck drivers, but that doesn’t discount the fact that truck driving a big rig is one of the most deadliest occupations in America. Bankrate says becoming a trucker is among the 10 deadliest career choices in the U.S., citing traffic accidents as the top reason for fatalities. The hours are brutal and the pressure to meet deadlines despite just brief moments of sleep is extreme. Statistics show that the majority of tractor trailer involved crashes kill at least one person in the crash. Understanding what’s causing the wrecks is one way to support truckers in their battle against being responsible drivers and the need to meet deadlines. But traffic crashes aren’t the only deadly factor truckers must consider. Here’s a look at what makes truck driving one of the most deadly occupations. 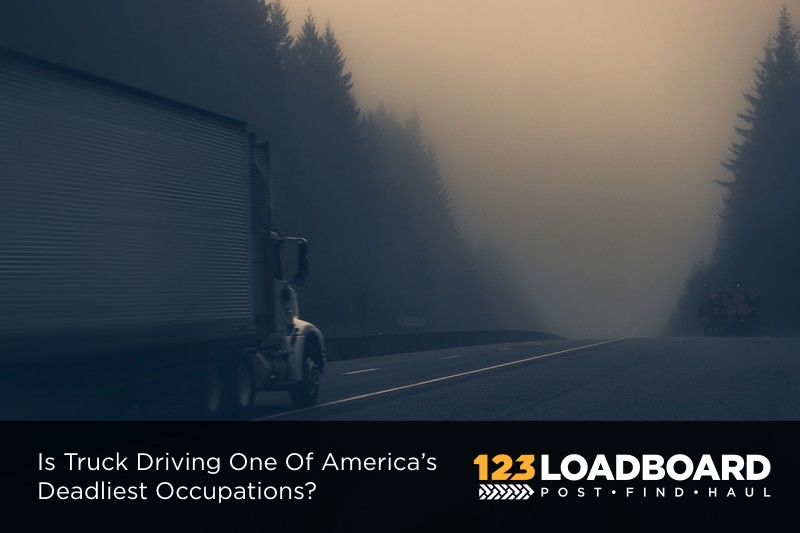 Truck drivers are expected to be on the road truck driving for several hours a day. While there is legislation in place that attempts to regulate the length of time a trucker can be behind the wheel in the course of 24 hours, those rules are often overlooked to make sure hauls are completed. Heavy and tractor-trailer truck drivers recorded 745 fatal injuries, the most of any occupation, in 2015. Time off may play a strong factor in that statistic. Truck drivers are lucky to get one day off each week. In general, transportation and material moving occupations accounted for over one-fourth of all fatal work injuries in 2015 making it one of the deadliest occupations in America.

Truck driving by nature is sedentary. Truckers are sitting for long periods at a time, often eating high-calorie, prepackaged food. According to the Journal of the American Dietetic Association, 86% of the estimated 3.2 million truck drivers in the United States are overweight or obese. Much of this excess weight is due to the combination of lack of exercise and poor diet choices. In addition to sitting all day, eating fatty foods, and drinking sugar-laden beverages, truckers are under a high amount of stress. The constant demand to meet deadlines, drive even when tired, and to weave through dangerous traffic weighs heavy on the heart – often causing high blood pressure or contributing to an eventual heart attack.

Truckers may be responsible for transporting hazardous materials, which makes the trek across the country even more dangerous, but more often than hauling a potentially deadly material is the threat of hauling a valuable load that thieves are after making it one of the deadliest occupations. Finding a safe place to sleep at night is tough for truck drivers. The National Transportation Safety Board estimates that 167,000 of 185,000 open spots at truck stops are filled on a nightly basis. It’s up to drivers to position themselves in a safe location, not only protecting their own life, but also the haul they’re carrying. While there is no federal law that prohibits a trucker from carrying a gun in his truck, the majority of employers forbid it, which means truckers must find another means of protection. Contributors on the truckingtruth.com forum mention wasp spray, bear spray, and a ball-peen hammer as tools used for self-protection.

At the international LogiSYM 2017 logistics and supply chain conference in Singapore, company reps for Airships Arabia and Airships Australasia garnered a lot of attention for their Day 2 keynote presentation on the use of airships for logistics and freight shipment.