Guns. Should Truckers Carry Them For Protection?

Truckers are one of the driving forces behind making American’s economy run. Delivering in-demand and often expensive loads of supplies to a number of retail stores, restaurants, and others can be a dangerous job. But, traveling across the country as a commercial driver can pose a few problems when it comes to drivers protecting themselves. There is no federal law that stops truckers from carrying guns as long as they abide by all state mandates. Truckers have the same right to defend themselves as anyone else, but it must be within the law. 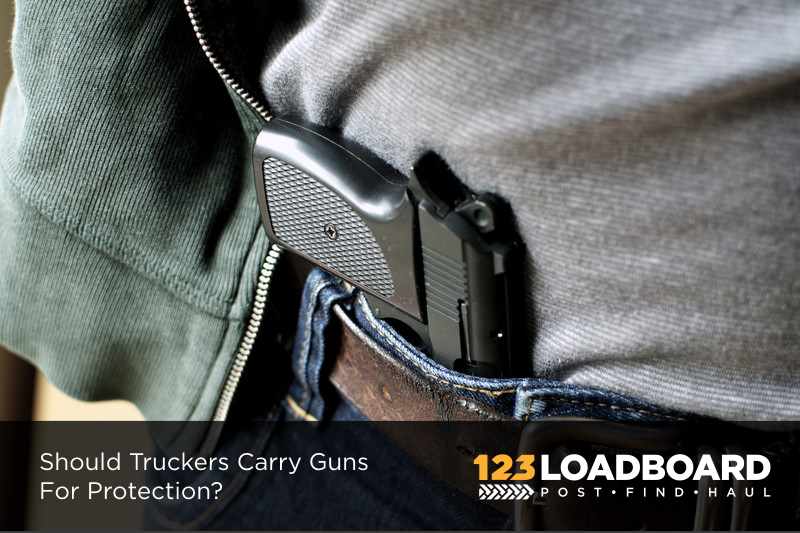 A common misconception among truckers and others, is the belief that having a license to carry a concealed weapon gives them the right to carry that weapon anywhere at any time. That is simply not the case. Some states do, however, honor the license obtained in other states. For example, drivers traveling through North Carolina will have their out-of-state license honored. On the other hand, California fails to recognize the license of any state but its own when it comes to concealed weapons.

An employer may claim that federal laws ban truckers from keeping a firearm in their truck. It’s worth saying again: there is no federal law that prohibits truckers from carrying a gun in their truck but read this article about a night in jail on account of an unloaded pistol. In fact, a proposed bill, if passed, would allow truckers to circumvent state laws and carry a weapon for self-defense across all state lines. The Small Business in Transportation Coalition started a petition in support of truckers carrying firearms for personal and load protection following the brutal murder of 30-year-old truck driver Mike Boeglin. The soon-to-be-father was parked near a steel plant in Detroit in June 2014 when he was shot numerous times and his truck set on fire.

Mike’s Law would have allowed truckers to carry weapons while on the job for self-defense, but the federal law fell short by one vote and wasn’t passed. For now, truckers are at the mercy of state laws and employer guidelines when it comes to carrying a gun in their rig.

Weapons Truckers Can Use

For drivers whose companies forbid them from having a gun as a form of protection, or routes across state lines don’t allow them to transport one legally, there are other weapon choices available – some are a bit unexpected. Trucker forums have voices from across the country on personal experiences with protection and weapons of choice. Writers on the truckingtruth.com forum mention wasp spray, bear spray, and a ball peen hammer as effective methods of self-protection.

The bottom line for truckers wishing to carry guns in the cab is to know the law, know what the employer expects and have a backup plan when it comes to self-defense.

CSA Score and How It Affects Your Job Options

The CSA Score from the Compliance, Safety, Accountability (CSA) program affects any interstate carrier that has a USDOT number. There is no specification to the size or type of carrier. Waivers from participating in the CSA program are not available.

Traits of Good Truck Drivers. Do You Have the Skills to Succeed?

How Truck Drivers Stay Entertained on The Road