Diesel Fumes and The Effects On Truckers

Most jobs don’t involve constant proximity to cancer-causing substances like diesel fumes, but most jobs aren’t like trucking. This danger, of course, refers to diesel fuel and the fumes that burning diesel fuel causes. The fumes are carcinogenic, and while they don’t make trucking as dangerous as working in a nuclear reactor, they do raise a number of trucker health and trucker safety concerns. Here are some details to help truckers better understand the issue, how to combat it, and ways that they can keep themselves safe. 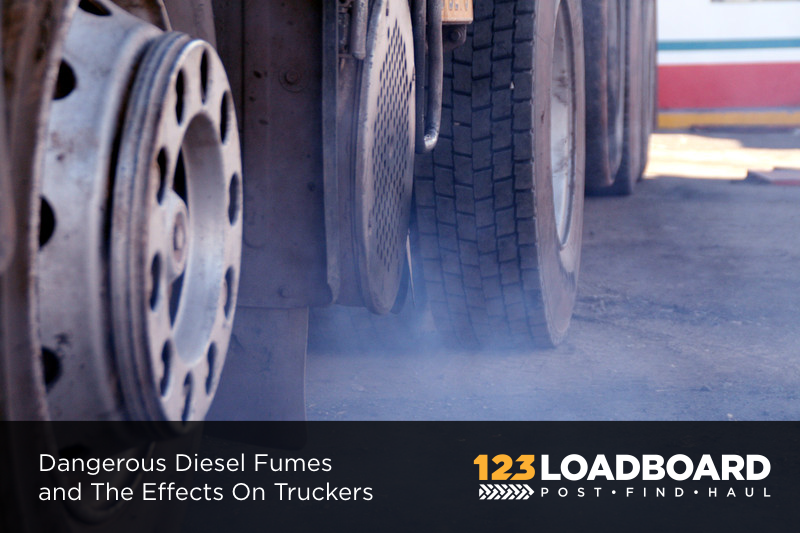 The human body experiences both short-and long-term effects from exposure to diesel fumes. In the short-term, diesel exhaust can irritate a trucker’s eyes, nose, throat, and lungs – essentially most areas of exposed soft and wet tissue. This exposure can cause symptoms ranging from nausea to headaches to coughs and other respiratory issues.

Long-term, the effects of diesel fume exposure are even worse. There are at least 40 different toxic compounds in diesel fumes. They increase a driver’s risk of developing asthma and heart disease, as well as neurological issues and different types of cancer, particularly lung cancer. Obviously, once someone develops one of these long-term problems, further exposure to diesel fumes can exacerbate the issue and make it worse.

How the Industry is Combating Diesel Fumes

Fortunately, the trucking, energy, and medical communities have been hard at work trying to mitigate the risks that diesel fumes pose to truckers. Engines have become more efficient, burning less fuel and releasing less fumes. Moreover, the fuel itself has become much less toxic due to significant composition changes. Legal changes also bode well for trucker health and safety. For instance, The California Air Resource Board’s Diesel Risk Reduction Plan will result in an 85% reduction in diesel particle emissions by 2020.

How Truckers Can Stay Safe

Even with engine and fuel improvements, truckers are definitely at a higher risk than most people for dangerous diesel fume exposure. Fortunately, truckers can take some steps to further protect themselves while longer-term solutions are being developed. These tips include:

While these tips won’t entirely eliminate all risks to trucker health and trucker safety, they can help protect truckers from some of the effects of dangerous diesel fumes. Stay safe and find loads today!

Learn about our load board

Hot Shot Loads And Where To Find Them