Truck Only Lanes. Good or Bad for Truckers?

Georgia recently proposed truck only lanes for owner operators to run along Interstate 75 for 38 miles. Cited as the “largest truck only project in the nation,” the roadway will cost $2 billion to construct and should be completed by 2030, potentially paving the way for two additional lanes in the other direction.

Are truck only lanes the way of the future? 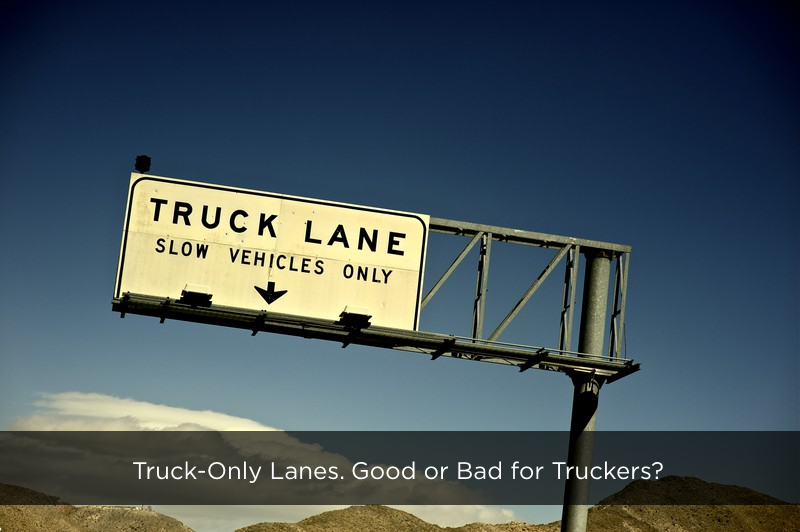 Separating truck owner-operators from other motorists makes sense for improved safety and risk management, as well as the ability to deliver important truck loads cross-country faster. It also provides increased safety for motorists.

Thousands of motorists per year are killed in car-and-truck crashes, yet rarely is it the fault of the owner-operator, who went through extensive driver training.  More than 80 percent of car and truck crashes are the fault of the car driver, says the American Trucking Association.  And, 98 percent of these accidents end in the motorist’s death. Trucks and passenger vehicles sharing lanes is simply dangerous.

Certainly, separating owner-operators from other motorists can play a role in trucker safety and risk management. It could even lead to a re-evaluation of truck mandates related to the hours owner operators are allowed to drive, since these truck-only lanes may reduce the risk of accidents and make it safer for owner operators to drive for longer periods.

Just like HOV lanes with more than one person in the car reduce rush hour traffic during commuting times, truck-only lanes could make roadways more pleasant and less congested for all motorists.

Trucks, by their nature, often drive more slowly than passenger vehicles and a truck in the right or middle lane – coupled with motorists afraid to pass the truck – can clog up traffic for miles. Giving owner operators their own lanes eliminates these issues and lets truckers set their own safe pace.

There is Faster Transportation of Necessary Goods with Truck Only Lanes. When owner-operators can’t get to their destinations efficiently, store owners suffer, consumers suffer, and eventually, the U.S. economy suffers as a result. The price of goods may rise dramatically due to supply and demand, salaries don’t keep pace, and the economic system begins to crumble. Indeed, owner operators play an important role in keeping our country’s economy strong.

Highways of the Future: Weighing the Benefits and Drawbacks of Truck-Only Lanes

Certainly, giving trucks their own lanes is less dangerous and better for the stores that rely on the delivery of goods in a timely manner. But do the benefits outweigh the drawbacks of funding the construction of these lanes?

Most owner operators favor their own lanes as long as they are toll-free roadways. So then how will they be funded? Truck accidents cost owner operators thousands in lawsuits each year, but owner-operators aren’t viewing truck only lanes in terms of savings. It could be well worth paying additional tolls if owner-operators had fewer accidents and could deliver their goods faster. They’d spend less in gas by avoiding traffic, and they’d be able to drive more miles in less time, resulting in higher hourly wages.

Truck-only lanes may be good for the future of motorists, but finding acceptable ways to pay for these roads requires a cost-benefit analysis that takes all factors into consideration, including risk management and profitability for owner operators.

123Loadboard’s popular app for load searching, launched a 2.0 iOS update that introduces the fastest ever in-app searching as well as a new interface to allow carriers more options for filtering and displaying their loads when using the load board features.

123Loadboard Adds Email Bidding To Speed Up The Booking Of Freight