The world’s first self-driving semi-truck, also know as autonomous trucks, the Freightliner Inspiration from Daimler, was unveiled in 2015. With limited capabilities, and currently no real-life applications, it was just declared to be street legal in Nevada. The semi-truck can drive on certain highways in the state, but must give up control to a human driver on other streets, when entering and exiting the driverless highway, and when docking. 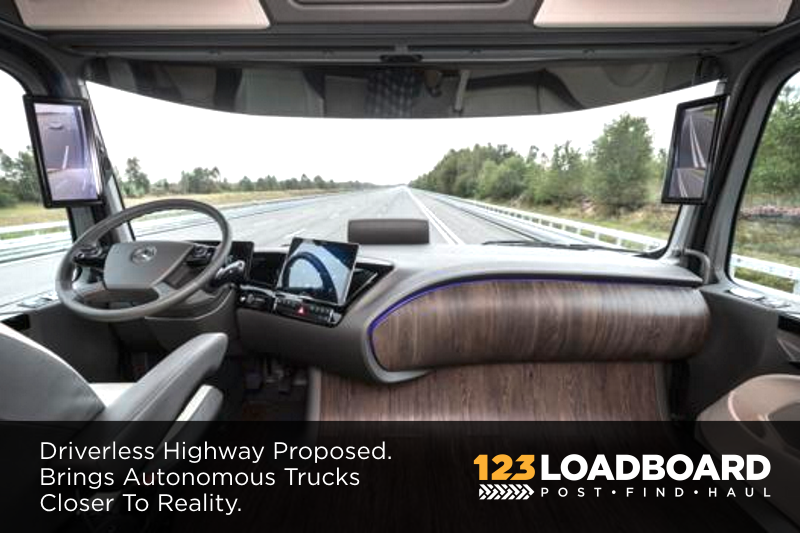 But in the future, when it’s ready to hit the road with no driver at all, it could very well have its own superhighway with no motorists.

The Central North American Trade Corridor Association (CNATCA) proposed a driverless truck route adjacent to U.S. Route 83, which would permit driverless trucks like the Freightliner Inspiration to troll along, uninterrupted and unencumbered by the necessities and whims of human motorists.

From Mexico to Canada

The 1,800-mile north-south highway would actually begin south of I-83 in Mexico and run into southern Manitoba, Canada, making the North American Free Trade Agreement more profitable and, as such, has been deemed the NAFTA Superhighway.

The trucks could change the way we look at safety and risk management. The trucks could go for days (or, at least, until they needed a diesel fill-up) without resting. They could also be cleared electronically to cross the border without stopping at customs as human motorists would be required to do.

CNATCA proposed the highway as a means to safely and efficiently transport North Dakota’s rich stocks of oil to places that need it. Rather than replacing existing owner-operators, the highway could reduce the strain on trains and railways heading into Canada.

But the highway could do so much more, especially in terms of demand for self-driving vehicles. Human motorists may feel not comfortable sharing the road with these robots-on-18-wheels, but placing them on a self-contained road seems less dangerous.

The Future for Owner Operators

Self-driving trucks are already a reality, with the Freightliner Inspiration on the road and Otto, an autonomous truck retrofitting service founded by ex-Google engineers, operating in San Francisco. With its recent purchase of self-driving truck startup Otto, Uber Technologies is entering the long-haul business, aiming to establish itself as a technology partner for the trucking industry.

A highway devoted to self-driving trucks could solve many of North America’s transportation challenges, including driver training and risk management, while alleviating some people’s concerns about the dangers of autonomous vehicles.

For the future of the trucking industry, and especially for owner operators, the autonomous trucks have several ramifications that probably won’t affect the industry for years. Safety and risk management procedures would be related to IT and security rather than truckers getting enough sleep. Owner operators would focus more on running their trucking business, claiming routes, and perhaps even maintaining these sophisticated vehicles.

With the challenges ahead, autonomous trucks won’t replace owner-operators on a large scale any time soon, but in the long haul it could make their lives easier.

Reduce your empty miles and find loads to haul!

Technician Shortage: Who Will Service The Trucks?

123Loadboard Adds Email Bidding To Speed Up The Booking Of Freight