Avoid traffic. How to plan your next truck route.

Trying to avoid traffic jams is good for truck drivers as well as trucking industry managers, dispatchers, executives, and shareholders. Contending with traffic jams on the nation’s highways while trying to ship freight can be incredibly costly in time and money. 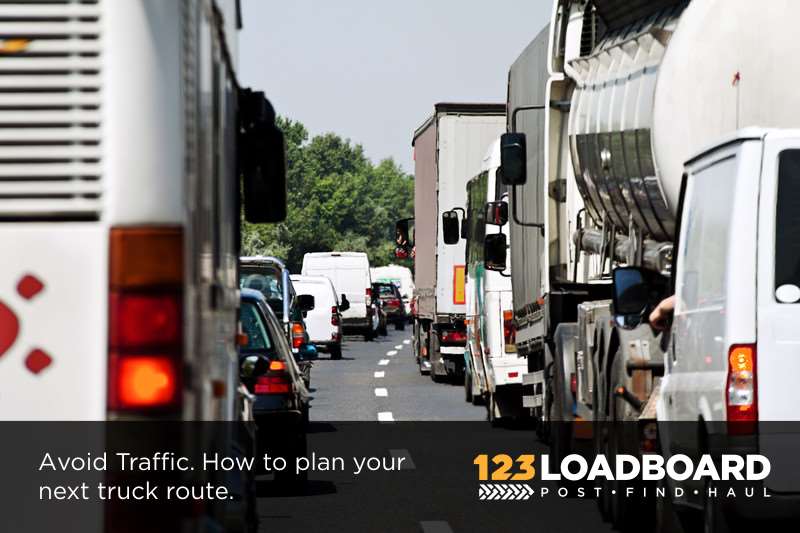 One study by the American Trucking Research Institute concluded that trucking industry executives have an urgent problem to face when it comes to traffic: $50 billion in yearly trucking industry losses due to trucks sitting idle in traffic for long periods of time every day. Specifically, the American Transportation Research Institute (ATRI) was able to extrapolate this figure with a study that found somewhere in the neighborhood of 728 million work-productivity hours lost every year as a result of trucks contending with slow traffic and sitting stuck in traffic jams in the nation’s top 100 sites for the worst traffic jams. To put it in perspective, of the roughly 3.5 million truck drivers in the United States, it would be the equivalent of 260,000 of them not driving at all if the rest were able to drive the entire route without any interruptions or delays due to heavy traffic. So that’s 260,000 truck drivers’ salaries a year worth of waste.

And not just that, but the wasted costs of maintenance, the underutilization of fleet inventories, and the costs of trucks sitting on the highway and burning fuel without going anywhere. Fuel is one of the biggest costs of the trucking business and efficient routes that avoid traffic save on fuel costs.

To combat this incredibly massive inefficiency of human and machine capital literally just getting “stuck” and not being able to produce results for so many of those hours during which they’re costing the industry money, one of the best methods is the use of modern digital technology to plan truck routes effectively to avoid traffic in the worst places at peak traffic hours.

Cloud technology and GPS allow truckers and fleet managers to get real-time data about where their fleet vehicles are on the nation’s highways and what the traffic conditions are like in their respective areas and routes. Leveraging the power of this information, wise truckers and fleet managers are able to plan out the most efficient delivery routes and schedules that take into account the area, time of day, and historical as well as real-time data on traffic. Even during rush hour, with proper planning and the effective use of technology, millions of dollars can be saved when drivers dodge and miss areas of high traffic congestion and get to their destination on time.

The result is the more cost-effective deployment of human and machine capital as well as better customer satisfaction. Shipping customers face financial damage due to time loss as well when they are stuck waiting for a service appointment. They also don’t like to be stuck with an unreasonably large window of time to expect a driver to arrive with their freight, having to spend all that time waiting for the service professional to arrive instead of attending to the other pressing needs of their own. Highly effective route planning that avoids the unexpected and unpredictable delays of traffic congestions allows trucking companies to provide their customers with more precise arrival appointments in a narrower, less demanding time window.

When it comes to shipping freight across the country in tractor-trailers, time is money and the cost per mile is an ever-important metric. The longer each mile takes to travel, the greater the cost per mile. Planning ahead with proper GPS technology and accurate truck mileage software will definitely improve your bottom line.

Find a Load and Avoid Traffic

Load Alerts Direct To Your Phone

123Loadboard has a new way to help truckers find more loads - without any more searching. Using Big Data and GPS based technology, they identify available loads near the carrier’s truck that match their equipment type and allow the driver to receive a Load Alert notification on their smartphone sent directly from the broker or shipper with the relevant load details.